Geoff Pedder
This is my 11th FPL season, although my season history will show that for the first 6 I was distinctly average. At best.

As we enter the final few days before the 20/21 FPL season begins, this is when the real tinkering happens, where decisions are finalised and assets are locked into your squads.

You’ve been looking at your squad for a couple of weeks. You’ve had multiple line-ups. You’ve had new signings enter your team (and probably leave again). You’ve probably fluctuated from having one premium midfielder to having four at some point.

But how is your squad setup for the season and how flexible is it? You might be planning a really early wildcard in which case the structure isn’t really important, but if you’re planning for the first 6-8 weeks as is reasonably standard, then you should be aware of your possible moves. To be clear, this is different to ‘planning transfers’, but more focused on your price points and how easy is it to get to form players when needed, while minimising hits.

What is the optimal setup?

Sorry, you won’t find that here. Or anywhere, actually. There is no silver bullet, and there are many different ways to approach the game and still post great scores.

What I will attempt to do though is just talk around a few aspects that may help with your planning.

What are price points?

There has been plenty of talk about price points in the past, so I won’t pretend this is a new concept, but it’s useful to cover what is meant by this. Price points are a way of structuring your squad by using certain values, rather than actual players. By ensuring that you have multiple values included across the various positions, you are enabling higher levels of flexibility in the future.

Here are some possible setups: 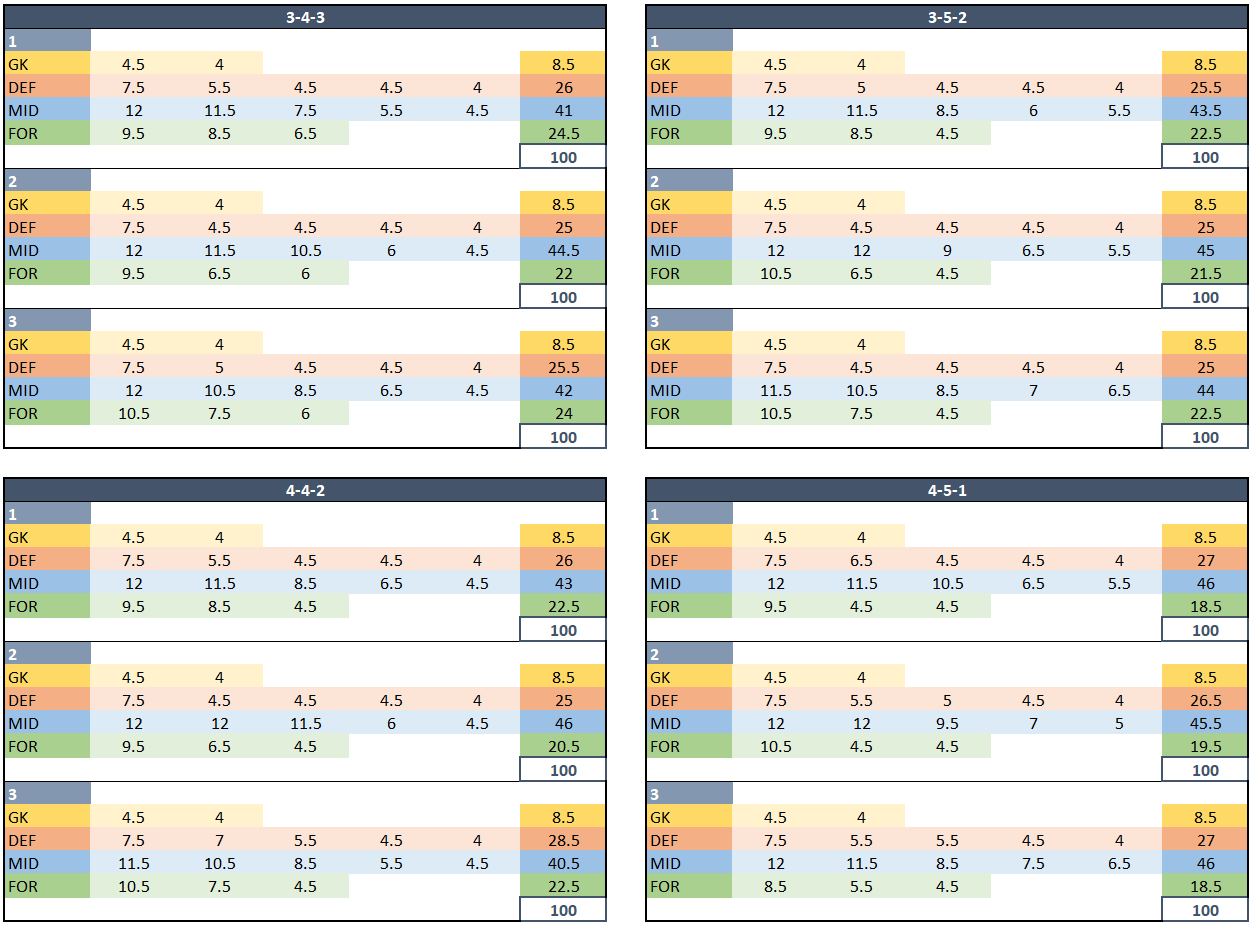 Note – all options include:

These are just examples. There are SO many more options, and I obviously can’t show anywhere near all of them, but I think this gives a good idea of possible budget spreads.

How does this benefit you in practice?

Firstly, it gives you a rough idea on how to construct your squad, and (hopefully) demonstrates how having a team full of premium players will limit your overall squad quality as the budget players filling in the gaps will not be to contribute enough (unless we have another season like 15/16 where value didn’t matter at all).

But more importantly, as referenced above, is the flexibility this allows not just between players, but also between formations, should that we required. Let’s take a look at the first example shown above under the 3-4-3 formations to see how that shapes up:

That’s a pretty solid setup, but let’s explore if, say, Rashford or Son get hot in the £9-9.5M range?

That’s just one budget breakdown using a single example! I could’ve also used the ‘what if Kane, Werner, Martial and Aguero all start firing and how do we get money into the attack’ scenerio. As we know it’s impossible to cover all scenarios and player values, and there is always the chance of a player popping up out of the blue who requires a re-allocation of funds.

What I’m hoping that single example does though is help you think about the squad you’re putting together and how, by thinking of as many permutations as possible, you can give yourself the best number of ‘outs’.

Realistically, assuming you don’t have your budget allocated heavily into a single position, you should be able to get to most players in two moves. As has been talked about in other articles, though, you need all 11 of your players to contribute, so the consideration should not just be on who you are moving to, but also where that money is coming from and what the other player involved in that double move looks like.

My ideal would be that my squad is capable of flexing between formations when needed while allowing me to get to any player easily. But for many this is too restrictive and they simply prefer picking the players they think will score the most and then seeing what else they can fit around that. As I said above, there is no silver bullet(!) – play your own game and be comfortable with that. This article is just highlighting one way to approach it.