Three forwards have quickly become the FPL template. However, popular Wildcard pick Isak (£7.1m) is now expected to be out for several weeks, and Jesus (£8m) is now facing a fixture swing of more difficult games. Due to these factors, Toney (£7.3m) has become a very popular transfer in. This article will look at the top forward options, including Toney, to analyse whether he is the best transfer to make right now, or if there is an enticing differential who is worth taking a punt on.

[All statistics and heatmaps are taken from FFFIX]

In 7 games, Toney has scored 5 goals (xG=3.35), with only Haaland, Mitrović, and Kane ahead of him. Understandably, he is in the top 5 among all forwards for total shots (17), and big chances (7), coming in at joint-6th for shots on target (6). He also has the great advantage of being Brentford’s first-choice penalty taker. In terms of assists, he has 2 so far (xA=1.93). He is also 3rd among forwards for attempted assists (11) and, along with teammate Mbeumo, has created the most big chances (4) of any forward. Therefore, his current form definitely justifies him being a top transfer target at the moment. 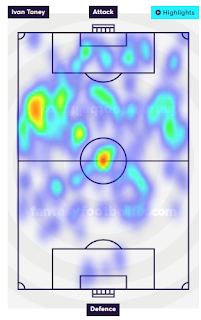 Most notably, Brentford face Bournemouth, who are 19th for shots conceded (117) and for goals conceded (19), in GW9. After this, they do face some tough defences of Newcastle, Brighton, and Chelsea in succession. These games are not ideal for Brentford attackers, but they have been registering some great numbers. Among all teams, they are:

Therefore, although they have some tougher fixtures, they are in great form to get some points from these games, and, if they do score, it is likely to be Toney as he is in great form right now. I think his numbers definitely justify transferring him in ahead of GW9 – the only issue may be lack of funds.

It is very likely that you’ll already have Mitrović (£6.9m) in your teams too, and, despite an injury concern, it looks as though he will be fit for GW9.

Like Toney, he has had a great start to the 2022/23 campaign. He currently equals Kane on 6 goals (xG=4.10), with only Haaland beating him. He has also taken the most shots (31) of any player so far this season, and is 2nd among all players for shots on target (16) and big chances (8). Like Toney, he has the advantage of being on penalties, but Toney does beat him on assist potential. So far, he has no assists (xA=0.72), but has attempted 6 and has created 1 big chance.

They do face a tough Newcastle defence, but after that come up against some out-of-form teams.

Their great results are also exemplified by their attacking stats:

Therefore, if you do not already own Mitrović then I would definitely recommend buying him soon, and if he continues his form then he will be a great long-term hold.

Solanke (£5.6m) has just 1 goal (xG=0.52) so far, having 8 shots with 5 on target, but having no big chances. He also has 1 assist (xA=0.44), attempting 1 and creating 1 big chance. Compared with the likes of Toney and Mitrović, his stats find it hard to justify taking a risk on him. However, what is really pushing people towards him are Bournemouth’s upcoming fixtures: 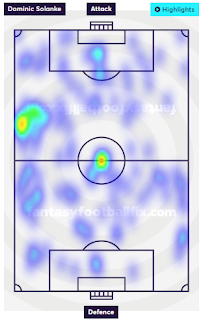 Over the next few gameweeks, Bournemouth have some great fixtures where they will be really looking to bounce back and gain valuable points. Therefore, a striker who is also on penalties for £5.7m to own during these fixtures is very appealing, especially as a differential compared to other popular forward options. However, Bournemouth have been poor so far this season. They are:

This will be partly because they have already faced Liverpool, Man City, and Arsenal, but their poor form will have to be taken into consideration.

Therefore, although Solanke is an enticing differential, I think Bournemouth’s form and attacking numbers would put me off taking a risk on him, especially if you are going without Toney or Mitrović who have very high ownership. However, if you don’t have the funds to get Toney and really want a new striker, then he does become an option.

Leicester do have some great upcoming fixtures, particularly in the next 2 weeks where they face struggling defences.

FPL managers will be familiar with Leicester’s poor defensive record, but players like Maddison and Barnes have still been quite popular due to their goal-scoring ability.

Although their goals scored looks promising, their underlying stats are worse and not as appealing. I still think Maddison is the best Leicester attacker to get, and I personally wouldn’t risk going with Daka who is a minutes risk. However, he does have huge potential for points if he does start and if you wanted a short-term punt, especially if you don’t have the funds for Toney.

Watkins (£7.2m) has also scored 1 goal (xG=1.27), having made 8 shots, with 4 on target, and having 2 big chances. He has got 2 assists (xA=1.25), attempting 4 and creating 1 big chance. Unlike some of the other options here, Watkins doesn’t have the benefit of being first-choice penalty taker.

However, Villa do have a lot favourable games coming up:

Other than a tough GW11 fixture against Chelsea, Villa do have some great games against weaker defences. Because of this, budget midfielder Bailey has been a fairly popular pick on the Wildcard. Among all teams, Aston Villa are:

They have of course had some tougher games against Man City and Arsenal, but Villa aren’t in great form at the moment compared to the likes of Brentford and Fulham. They do have some great games coming up, but I personally wouldn’t take a chance on Watkins.