The ‘big at the back’ strategy has had varying levels of success, so in this article I look at whether the premium options in defence are worth holding onto, and which budget-friendly options have caught the eye.

[All stats are taken from FFFIX]

Despite their positive opening fixture run, Liverpool have kept just 1 clean sheet in 5 gameweeks and conceded 6 goals, leaving those with both Alexander-Arnold and Robertson quite frustrated. They are also:

In the Premier League, their upcoming fixture are as follows:

This does look fairly positive from a defensive standpoint, but with a handful of tougher fixtures. However, given their upcoming schedule, rotation is expected in the Liverpool squad:

Alexander-Arnold (£7.5m) has scored 1 goal from quite a low xG of 0.25, and is second among defenders for total shots (8), with 1 on target, but is yet to have a big chance. He has had 1 FPL assist so far, accumulating an xA of 0.88. Despite Liverpool’s poor defensive form, he is still top among defenders for attempted assists (12), and has created 2 big chances. The potential upside of owning him is still very apparent.

Considering Liverpool’s defensive form right now and their upcoming fixture congestion, moving away from double Liverpool defence and investing elsewhere does seem like a valid move.

Man City have kept 3 clean sheets in 5 games, with only Brighton matching them in that regard, and conceded 5 goals. Overall, they are:

Man City also continue to have a fairly positive fixture run, but, as with Liverpool, will face huge fixture congestion:

This makes the issue of ‘Pep Roulette’ even more prevalent and harder to predict.

The second-highest owned defender Cancelo (£7.1m) is the highest-scoring defender so far, with 31 points, 1 goal (xG=0.12) and 1 FPL assist (xA=0.16). He has shown that he can do a lot of damage, despite having low expected figures. Overall, he has made 4 shots, with 1 on target, and has attempted 3 assists. He has been very nailed in the City defence, starting 36 of 38 games last season. As such, I think he is still a solid long-term hold.

Premium defender Dias (£6m) was frustratingly benched in GW_, but is also fairly nailed in the City defence. As a centre-back, he is not as attacking as Cancelo, having no goals (xG=0.33) and not yet registering an xA. He has so far made 3 shots, with 1 on target, and had 1 big chance. He does have a premium price tag, but in the long term would be a solid Robertson replacement.

Popular asset Walker (£5.1m) has not registered an xG, and has an xA of 0.09, with 2 attempted assists. Now that rotation will be much more likely, a lot of his owners will be looking to move him on unless there are other transfer priorities.

Brighton have, along with City, kept the most clean sheets (3), and have conceded the least amount of goals (3). They are also:

Brighton continue to have favourable fixtures until GW9 and 10, when they face Liverpool and Tottenham in back-to-back games. If you are considering a Brighton defender, also having Sánchez may not be viable for these games.

Veltman (£4.6m) is currently the highest-scoring Brighton defender, with 25 points in the opening 5 games, averaging just over 5 points per 90 minutes. However, his potential for attacking returns hasn’t seemed too promising from the data we have. He has an xG of just 0.08, having only 1 shot on target, and is yet to register an xA – creating no big chances and attempting no assists. 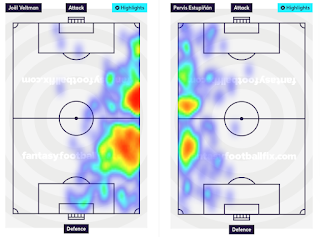 Considering he has played less minutes than other defensive options, Estupiñán has attempted 5 assists and created 1 big chance. Against Fulham, he received an assist for winning a penalty, and currently has an xA of 0.48. However, he has lacked a goal threat so far compared to the likes of Webster, having just 1 shot and an xG of 0.0.1. This is also evident in his record, scoring 4 goals from a total of 177 matches played. The assist potential he has already shown will definitely be on many managers’ radar.

Out of the centre-backs, Webster does seem like the more viable option ahead of Dunk. Of the wingbacks, I personally prefer Estupiñán and think he has very exciting potential.

Arsenal’s popular defensive assets have been frustrating to own at times, but do come out with 2 clean sheets and 4 goals conceded. Overall, they are:

Therefore, there is great value to be had in the Arsenal defence. However, they do have a mixed bag of upcoming fixtures:

New to the Premier League, Saliba (£4.7m) has put in some great performances, and is the second-highest scoring defender with 29 points. He has 1 goal to his name with a low xG of 0.11, having scored his goal from the one shot on target he has had. He also has 1 assist and an xA of 0.95, attempting 2 and creating 1 big chance. 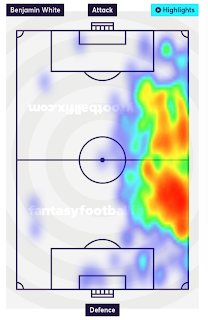 White (£4.5m) has consistently been a budget-friendly route into the Arsenal defence. He is yet to register an xG, and has no assists (xA=0.42) so far, but has attempted 2 and created 1 big chance. He doesn’t have the goal threat that Gabriel has, but does remain a viable budget option if you need money elsewhere.

Chelsea have just 1 clean sheet in the opening 5 games, coming out of GW5 with a 2-1 loss to Southampton, and have conceded 8 goals. They are also:

They have a tricky fixture in GW8 against Liverpool, but do have some favourable upcoming fixtures. Being in the Champions League, they will also have a congested fixture period in September:

However, the potential upside of their wingbacks is huge.

The extent of James’ (£6.1m) injury is still unknown, but if he is fit for GW6 then I think he is still an explosive asset with huge upside. He has scored 1 goal with an xG of 0.57, having made 7 shots with 2 being on target, and has had 1 big chance. He also has 1 assist and a great xA of 1.40 – the highest among all defenders. In the first 5 games, he has attempted 7 assists and created 2 big chances.

Cucurella (£5.2m) has also had a great start to the season. So far, he has registered 2 assists from a low xA of 0.34. Despite this overperformance, he has attempted 5 assists and created 1 big chance. He hasn’t had as big of a goal threat as James, with no goals (xG=0.27) and 4 shots, but none on target.

Considering Chelsea’s current defensive form, the double-up of James and Cucurella may not be a great long-term option, especially as Cucurella will be more of a minutes risk.

In the first 5 games, Tottenham have kept 2 clean sheets and conceded just 4 goals. Overall, they are:

Despite some favourable fixtures, Spurs do have some tough upcoming games, paired with their September schedule:

Popular pick Perišić has not scored, and has an xG of just 0.05, having made only 1 shot that was off target. However, he has bagged 2 assists (xA=1.08), attempting 8 and creating 2 big chances. He undoubtedly offers great attacking threat, but still carries a threat of rotation that will be exacerbated by Tottenham’s tight fixture schedule.

Emerson Royal (£5.1m) has registered 1 assist and a further FPL assist from an xA of 0.16, attempting a total of 2. He has no goals, but has made 6 shots and has an xG of 0.51. Despite his solid start, there will definitely be competition for minutes from Spence and Doherty.

Dier (£5m) is a more nailed choice, but has no goal involvements, a very low xG of 0.07, and no registered xA.

Newcastle have kept 2 clean sheets in 5 games, conceding 8 goals. Among all teams, they are:

Newcastle have a very good upcoming fixture run, and their defence could provide great value over the next few weeks.

Trippier (£5.1m) has been a solid asset to own, scoring a goal against Man City (xG=0.22), making 3 shots and 2 on target. He is yet to register an assist (xA=0.24), but has attempted 5. He is also on free kicks, and if Newcastle can put in some big defensive performances in upcoming games then he would be a great hold, and he has shown that he can return in those trickier fixtures.

The Wolves defence has always been a popular one, and they have conceded just 4 goals so far and kept 2 clean sheets. They are also:

Unfortunately, Wolves have a very tough fixture run, facing Liverpool, Man City, and Chelsea in the next 5. Therefore, if you are considering the Wolves defence, you will probably need to rotate them quite heavily.

Jonny (£4.4m) currently has no attacking returns, with an xG of 0.20, and no registered xA. In total, he has made 5 shots, but none of them have been on target. He is a bargain way into the Wolves defence, and his starting position is pretty safe.

Someone who has been subject to rotation is Aït-Nouri (£4.4m). As of now he has an xG of just 0.06, but with only 2 total shots and 1 on target. He has a better xA of 0.58, with 4 attempted assists and 1 big chance created. The downside with Aït-Nouri however is that he is a minutes risk.

Brentford have just 1 clean sheet in 5 games, having conceded 7 goals, and are:

Brentford do have a favourable fixture run from GW6-10 apart from a home game against Arsenal, so their defence will be on many FPL managers’ minds.

Despite Jansson’s (£4.4m) set-piece threat last season, he is yet to register an xG or an xA and is currently an injury concern. However, teammates Henry (£4.5m) and Mee (£4.6m) have impressed so far. 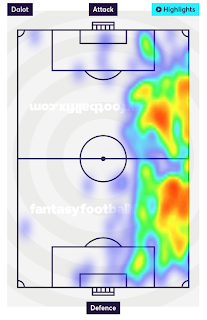 Dalot (£4.4m) has had 1 FPL assist (xA=0.83), having attempted 9 and created 1 big chance. He is yet to score with an xG of 0.36, with 4 shots, 3 on target, and 1 big chance. Despite their poor start to the season, Man United have kept clean sheets in their last 2 games. They do have tough GW6 and GW9 fixtures against Arsenal and Man City, but with some favourable ones also coming up. At just 4.1% ownership, he could be a very interesting differential if you wanted to take the chance.

Williams (£4.1m) has made the most shots of any defender (11), with 3 being on target, and 1 big chance. He has a positive xG of 0.85, but is yet to score a goal. He is also joint-2nd for attempted assists (9), and although he is yet to register one, he again has a high xA of 0.84 and has created 2 big chances. Despite Forest’s poor defensive record so far – they currently have the most xG conceded and the joint-most shots inside the box conceded – they do play Bournemouth (H), Leeds (A), and Fulham (H) over the next 3 games, and Williams would definitely be a viable option to play in your starting 11, particularly as injury and rotation issues have cropped up.

Another popular £4m option Patterson is also yet to have a goal involvement, with an xG of 0.44 and an xA of 0.53. So far, he has had 4 shots, with 1 on target and 1 big chance, and has attempted 2 assists and created 1 big chance. Everton are yet to have a clean sheet however, and they face Liverpool (H), Arsenal (A), and West Ham (H) in the next 3, so Williams is definitely the preferred budget defensive option here.

One to keep an eye out on is £4m Emerson for West Ham. He seems to have nailed down a starting position, but is yet to register an xG or xA, so will definitely be a wait-and-see option as he has only played 2 games so far.