My first article with Jumpers for Goalposts this season will be looking at differential options in defence, focusing on those priced at £5m and under with an ownership of below 10%. The most popular £4.5m defender so far has been Arsenal’s Tomiyasu. However, with him now being an injury doubt, this opens the doors to considering other options.

All stats and maps used here are taken from Fantasy Football Fix, unless stated otherwise.

A few FPL managers will still be considering £5m Doherty, who had a great run of games before an unfortunate injury last season. In his 874 minutes, he scored 2 goals (xG=2.85) and had 4 assists (xA=1.75), with an additional FPL assist. Doherty had the highest xG per 90 of any defender (0.29) and the 3rd highest shots on target per 90 (0.62). He also had an attempted assist per 90 of 1.54. However, given Tottenham’s latest investments in their defence, Doherty does carry a risk of rotation. 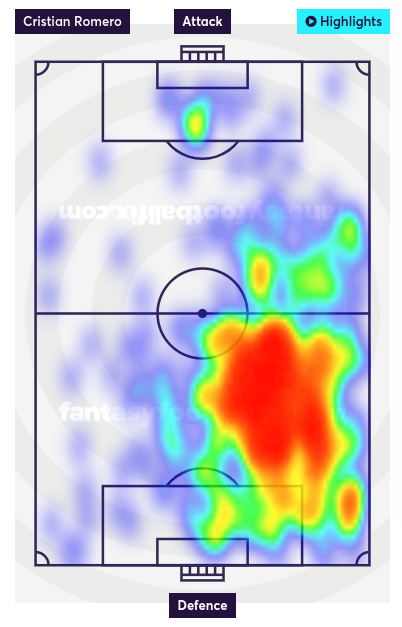 Doherty’s attacking threat compared to the other two are definitely shown in their heatmaps, with Dier and Romero’s goal involvement potentially coming from set pieces. However, there is also the question of rotation that we have to consider.

Arsenal have some of the strongest opening fixtures, which is one of the reasons Tomiyasu became so popular very quickly.

Although games against United and Leicester could prove to be tougher, they face 2 promoted teams in the first 6 games and some other favourable match-ups that could mean Arsenal defenders get off to a solid start.

White was a solid pick throughout last season, and coming in at £4.5m again he offers a cheap way into a very strong defence – but is only at 8.1% ownership. He scored no goals last season (xG = 0.62) and had no assists (xA=1.37). He made 12 shots, with 4 on target, and attempted 13 assists and created 1 big chance. His lack of goal threat compared to other assets may push you towards other £4.5m options. However, Arsenal are a strong defence with great opening fixtures.

Gabriel (£5m) was the 8th highest scoring defender last season, with 146 points and 5 goals (xG=3.03) – the only defender equalling that goal tally was Reece James. Due to this, he is at a higher ownership than White or Zinchenko, with 8.4% of managers choosing him so far. He made 29 shots, with 12 on target, making 0.85 shots per 90 and 0.35 shots on target per 90. Gabriel had 0 assists (xA=0.64), attempting 9 assists in this time, and created 1 big chance. Of all Arsenal defenders, he is predicted to score the highest number of points between GW1 and 6; with 21.7. 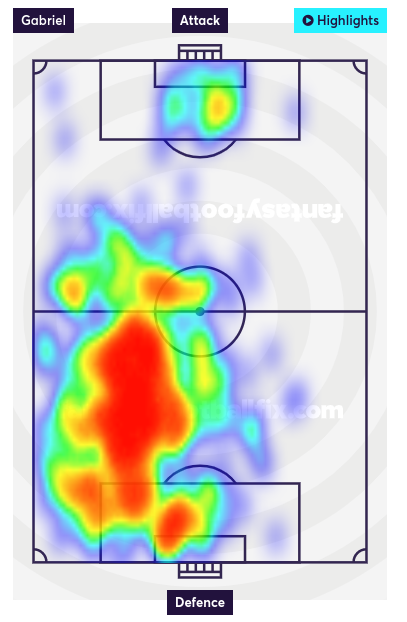 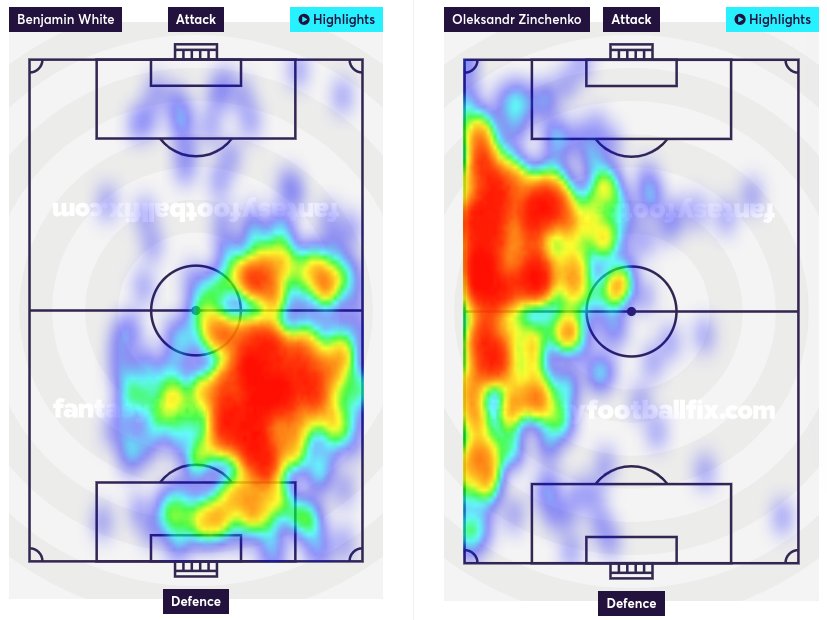 Arsenal looks to be a strong team to invest in, highlighted by Tomiyasu’s high ownership. With him now injured, FPL managers have the option to invest in other teams or jump on another Arsenal asset, while considering potential rotation.

Therefore, despite over-performing their expected goals conceded, there is the possibility that one of the Brentford defenders could be great value for money. Brentford were also 11th for goals scored (48), joint 11th for shots on target (154), and 9th for big chances (66).

After 2 tougher opening fixtures, Brentford hit a really good run of games, which is a reason Raya has been so popular as a £4.5m goalkeeper.

If you wanted to invest in the Brentford defence, Jansson (£4.5m), who played 3322 minutes last season, is a stand-out pick. In 2021/22, he scored 3 goals (xG=3.79) and 1 assist (xA=0.58), with a further 3 FPL assists. Jansson was among the top 10 defenders for shots on target (11) and had the most big chances (8) of any defender last year. He attempted 5 assists and created 1 big chance. Considering his set-piece threat, Jansson is definitely being overlooked, currently at just 2.9% ownership. 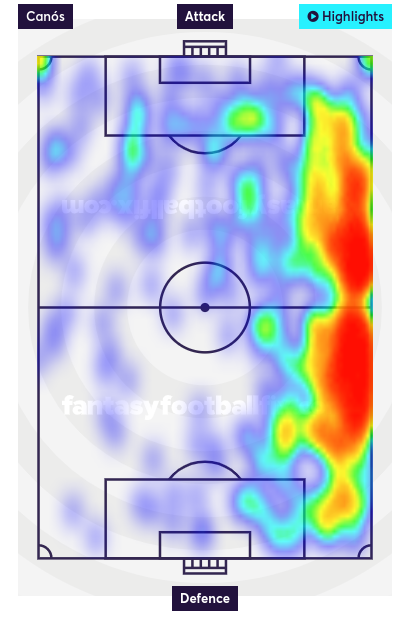 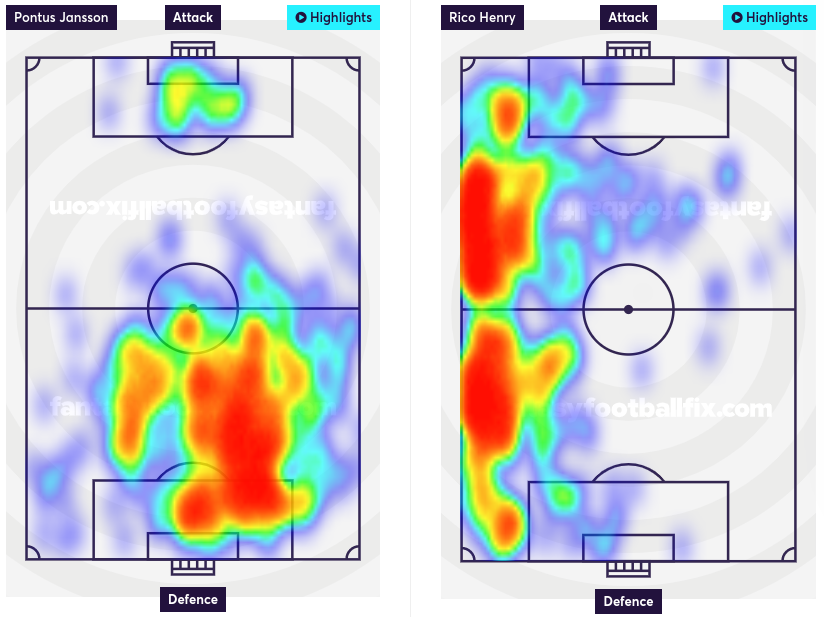 Henry and Canós take up the more attacking position down the wing, with Jansson being a centre-back who has a great set-piece threat.

With Ajer and Pinnock injured, the Brentford defence is looking weaker. Assets from stronger defences such as Brighton and Wolves I think will be more favoured, but as a rotational defender one of the Brentford assets could definitely work. However, if you’re set on having Raya as your keeper, then doubling up on the Brentford defence may not be viable.

Wolves are another team who struggled to score goals last season (38 in total, coming in at 17th), with only the 3 relegated teams scoring less goals than them. They were also 17th for shots on target (242), and 15th for big chances (54), so that is definitely a downside to Wolves assets.

With some great opening fixtures, it definitely looks like opting for a Wolves defender with low ownership could really bring value for money. Despite performing poorly in some statistics, Wolves have two very appealing £4.5m wingbacks.

Aït-Nouri has the highest points projection of any £4.5m defender and any team outside last year’s top 3 (24.3 points) for GW1-6 from Fantasy Football Fix. Although the risk of rotation has been brought up, with Marçal’s move away his starting place seems more assured now. Last season, he scored 1 goal (xG=0.53) and had 2 assists (xA=1.52), with a further 2 FPL assists.. 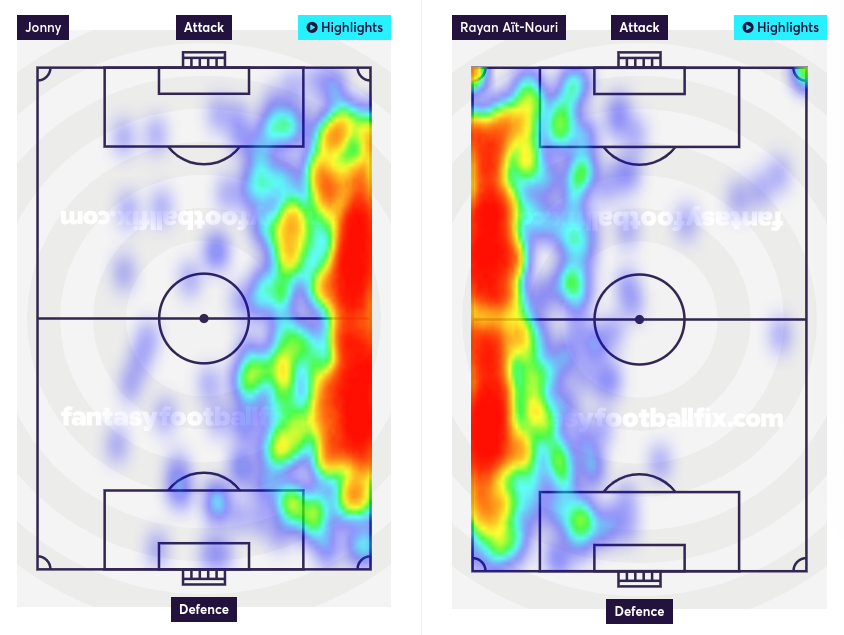 There definitely seems to be great value on offer in the Wolves defence, and taking a chance on one of these may provide consistent points while being able to invest more in your attack if that’s your preferred team structure.

Newcastle’s defence became a lot more popular towards the end of last season. Overall, they were:

Though not a very impressive record, their form at the end of last season was particularly promising. From GW32 to GW38, per game, they were:

It is unfortunate that they face City and Liverpool in the opening 6, but considering Newcastle’s form at the end of last season their budget defensive assets could be of great value in rotation.

Despite those two being rotation risks, I think Botman (£4.5m) would be a viable way into the Newcastle defence if you didn’t have the funds to stretch to Trippier. As he has just moved from Ligue 1 to the Premier League, I have taken his stats from FBREF. Last season, he scored 3 goals (xG = 1.40) and bagged 1 assist (xA=0.40). He is definitely not as attacking as Trippier, making only 5 shots on target. Trippier is definitely one of my top choices among the defenders, so if you could stretch to him I think it would be worth it, but as Botman should be nailed he could be a solid £4.5m pick to rotate during the more favourable fixtures – and is still only owned by 3.5% of managers.

At £5m, I think Trippier is definitely worth investing in over the differential of Targett. Trippier looked to be a very promising asset, where he scored 2 goals (xG=0.23). A lot of FPL managers agree, as he is at 16% ownership. I do think Botman could provide great value, and hopefully Newcastle pick up where they left off with their great form.

The big downside to Palace assets are their poor opening fixtures, facing Arsenal and Liverpool in the first two games, and then City in GW3. As such, they will probably be assets we invest in in the future, but it’s definitely worth looking at their defensive options for future consideration.

£4.5m defender Mitchell scored no goals last season (xG=0.26) and had 2 assists (xA=1.46). He played all but 2 of their games, and could definitely be a future differential when Palace hit a nicer fixture run. He attempted 21 assists, which comes out to 0.61 per 90, with 2 big chances created, and 4 shots, with none on target.

Guéhi scored 2 goals (xG=1.75) last season and registered 1 assist (xA=1.11). He had 19 shots, with 5 on target, and attempted only 6 assists and created 1 big chance. Guéhi registered a shot per 90 of 0.53. Guéhi also played 36 games last season, and although he does take up a less attacking role than Mitchell, he has a set-piece threat.

I think there will be other more valuable cheap defenders to start the season with considering Palace’s opening fixtures, but these assets are definitely ones to look out for in the future.

Brighton finished last season inside the top 10, and their defence did great last season. Among all teams, they were:

At times, Brighton struggled to get on the scoresheet, only managing 42 goals last season (joint 15th). They were also 13th for shots on target (151) and 11th for big chances (62).

Due to their defensive record, their assets surely have to be considered. Their opening fixtures also seem fairly positive:

With some tougher fixtures, they do face a struggling Leeds team and a newly promoted Fulham. This does allow for some great fixtures if you are able to rotate.

The main bargains from the Brighton defence have to be Dunk and Lamptey, both coming in at £4.5m.

From their respective heat maps, it’s notable that Lamptey is a much more explosive asset, taking up a more attacking role compared to Dunk’s position as a centre-back.

This can also be seen in their stats, as Lamptey attempted 21 assists compared to Dunk’s 3. This means that Lamptey came out with 1.21 attempted assists per 90. Both players had 19 shots, with Dunk having 7 on target and Lamptey having 4. This puts Lamptey’s shots per 90 as 1.10, with Dunk’s being 0.66.

Dunk seems the safer option here, with Lamptey’s injury record also a concern. At the £4.5m slot, I think Dunk offers great value as part of a strong defensive team. Lamptey is the more exciting option, but maybe one to add to the watchlist if you wanted to play it safe.

£5m Cucurella has also been an exciting asset in the Premier League, with his future still not confirmed. He scored 1 goal (xG=0.63), registering 18 shots with 3 on target. He also had 1 assist, with an expected assist of 2.84.

However, if he does transfer to City, then there will be Pep Roulette to manage.

If Cucurella doesn’t make the move to City, then Walker, currently owned by 5.4% of managers, becomes very interesting.

As always, Walker will be a minutes risk, but that risk does become more enticing if Cucurella doesn’t sign. However, there are a plethora of defensive options.

There are a lot of interesting choices in the United squad. However, they didn’t have a great 2021/22 season. They were:

Many managers will be tentative to take a chance on the United defence, but, at £4.5m, Dalot could offer great value. He played 1799 minutes last season, however scored no goals (xG=0.62), and made 13 shots, with 4 being on target. He had no assists (xA=0.93) and attempted 16 assists.

Leicester’s defensive record last season proved quite frustrating for those who owned them:

However, their attacking numbers were a lot more positive, being 5th for goals scored (62), 8th for shots on target (69) and 6th for big chances (73).

The main downside to Leicester fixtures are their opening fixtures, where they face Arsenal, Chelsea, and United:

Justin has been a pick highlighted by the FPL community, but is only at 3.3% ownership, likely due to initial rotation fears and an opening set of fixtures that aren’t as favourable as the top 4 teams’.

With him highly favoured to be the preferred left-back next season, he could be another bargain differential.

However, due to Leicester’s opening fixtures, he would have to be rotated – but this can be expected for a defender at his price.

Given his price tag, it would definitely be worth looking at Coufal more closely. West Ham finished 7th last season, and their record was as follows:

In between some very tough fixtures are some favourable ones, and although their defence was not as strong as others covered here, I think it is still worth covering Coufal as a £4.5m option.

Coufal scored no goals (xG=0.48) last season, having 11 shots and 5 on target. He did, however, have 4 assists (xA=2.17) and attempted 21 in total, with 4 big chances created. There are other options here with nicer opening fixtures who will definitely be favoured.

742930cookie-checkFPL Break the Template: Bargains in Defenceno
Share this article: